How Technology Has Influenced the Gaming Industry

Sales from the global gaming industry reached over $125 billion in 20181. We look at how gaming has developed, and the influence technology has on our gaming needs, wants and preferences, specifically in the board and video game sector.

Playing a game can be defined as an activity that someone engages in for amusement. We play games because it’s fun; it increases brain function, practices cognitive skills and releases serotonin, the happy chemical. As technology has advanced, the thrill and allure of playing games has only increased, with more visual stimulus, creativity, and satisfaction.

From the first board game, Senet, found in Egypt in 3100 BC to virtual gaming, facial recognition and gesture control technology, technology has changed the way people game. Dissecting the history of gaming and its platforms provides insight into how and why technology has influenced this activity…

Timeline of Gaming as an Industry

[3500 BC] Board games were played in most cultures and societies throughout history. The first game was discovered in Predynastic and First Dynasty burials of Egypt.2

[17th Century] Games were played such as draughts and card games, although the Pilgrims and Puritans of New England frowned upon it.

[1843] A shift from agrarian to urban living focused more on leisure time, and the earliest board game published in the US, ‘The Mansion of Happiness’ was based upon Christian Morality.

[19th Century] Board games were commercially produced and advancements in paper and print making, especially chromolithography, enabled rich colored images for vibrant card and board games.

[1902] Monopoly3, known as ‘The Landlord’s Game’, was designed by American Elizabeth Magie. The board game industry continues to grow exponentially from this point onwards.

[1937] The first electronical digital computer was built4, paving the way for more technological advancements in gaming. In 1950 computer scientists began designing simple games as part of their research.

[1975] Computer based games such as ‘The Dungeon’ to ‘Avatar’ in 1979 allowed multiple players to join forces and battle monsters together.

[1976 to 1982] Video games were well established in arcades and second-generation consoles are released; ‘Intellivision’ a console system was introduced for home playing in 1979. In 1982 US video game sales had already reached $2.1 billion, demonstrating the potential of the industry.

[1980s] Home computers appeared with built in games and floppy disks enabled games to be portable. New software and technology were built into home computers to enable better game playing. As the internet become more available, dial up bulletin board systems were used for online game playing. Handheld LCD games, especially Nintendo, spurred dozens of other portable games. Board game manufacturers developed their board game creations into video and computer editions.

[1997-2000] Mobile phones are released, and Nokia installs Snake on their phones. As innovations on consoles, PCs and mobiles are released, the market grows for all types of gaming. Board game sales continued to rise until 19996> despite predictions of a falling market due to the video game industry.

[2000-2011] Mobile gaming technology booms with the introduction of mobile game apps, and as a result board game sales fall. In 2011 physical and digital online games, including those on mobiles and through social media are worth $5.9 billion vs $2.03 billion on video game consoles and PC software7, despite the launch of sixth and seventh generation consoles.

[2012-2016] VR becomes a popular topic (despite initial developments in VR starting in the 1950s!8) and develops rapidly due to advancements in computer, graphics, video and camera technology.

How Have Mobiles & Apps Changed the Face of Gaming?

From 2016 to now, the global mobile app gaming market grew more than any other gaming type with an expected value of $72.3 billion in 20201. Mobiles and tablets have influenced the structure of many industries, from retail to hospitality, and gaming technology is no different. 50% of gaming will be conducted on mobile and tablet devices1, but with so many people able to play from the comfort of their own home, how do businesses provide such a core, and profitable, form of entertainment?

Gaming and the Entertainment Business

The difficulty for arcades and other places of leisure is attracting customers, due to the appeal and ease of mobile gaming. However, entertainment tablet kiosks are a cost effective, secure way to bring mobile gaming and the gamers, inside your business. Entertainment kiosks are not only popular in establishments where gaming is the focus; it’s a growing trend for restaurants and other businesses with a younger target market. McDonald’s are creating restaurants of the future by incorporating tablet kiosk mounts enclosing Samsung tablets with gaming and social media apps to increase footfall, customer retention and meet the expectations of tech-savvy customers.

imageHOLDERS custom Shell entertainment kiosk was recently acquired by McDonalds who wanted a custom design in keeping with the modern restaurant interiors. The kiosk is adaptable, so that advancements in tablet technology can be incorporated, whether they grow large or smaller. The tablet kiosk encourages guests to use the restaurant as an entertainment hub and spend more time there, giving the franchise more time to upsell.

Any business that may have a waiting or sit-down period can benefit from entertainment kiosks. imageHOLDERS tablet kiosks can be integrated with any device to become a multiple platform solution for gaming, paying and scanning. 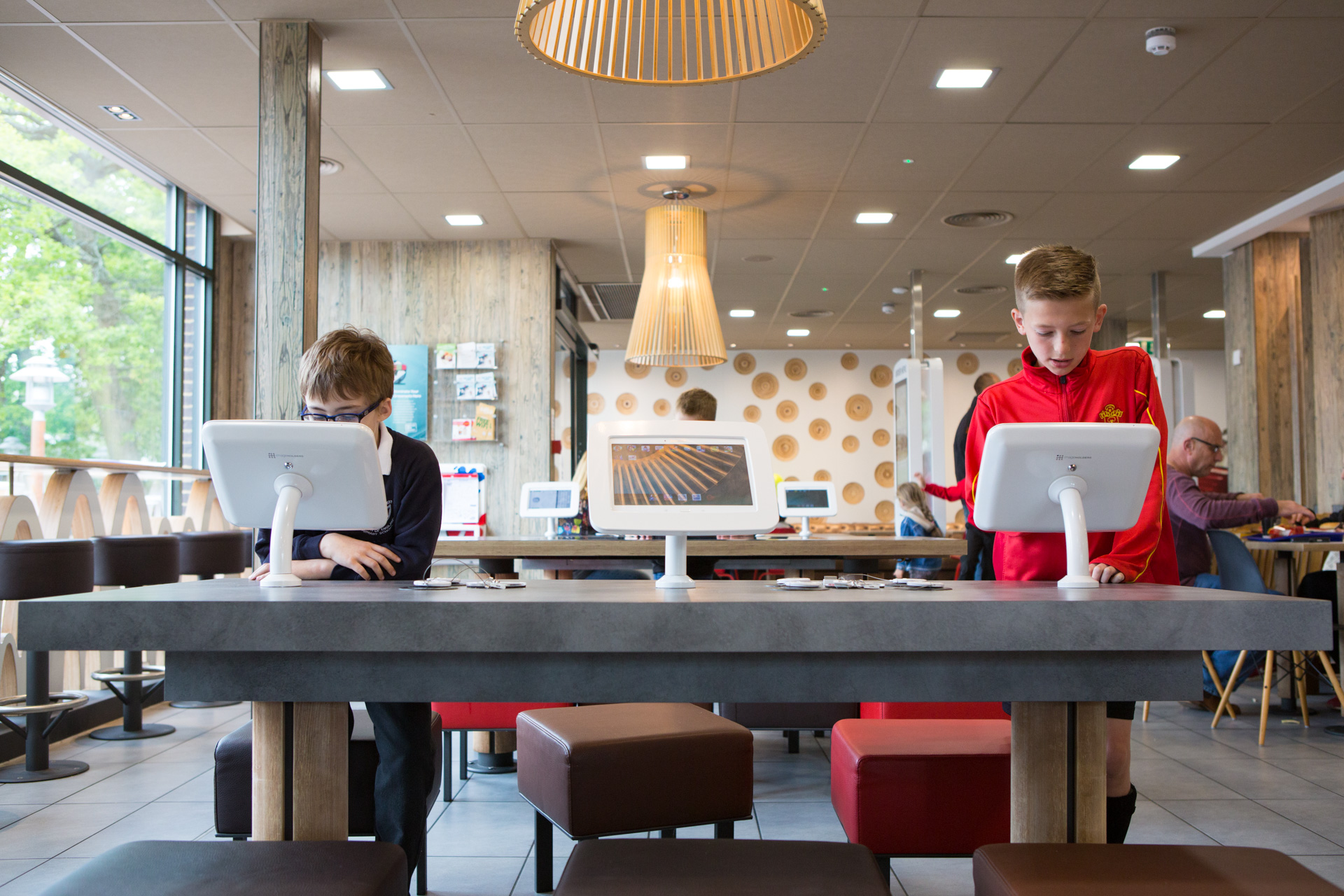 imageHOLDERS offer end to end kiosk solutions, from kiosk consultancy to singular or bulk manufacture, installation and software guidance. Talk to us about our custom tablet kiosks with device integration or simple iPad enclosures by calling 01202 892 863 (UK) or 1-888-858-9778 (US) or email [email protected].